CYRIL'S SUCCESS BY THE BUCKET LOAD!

Riddling potatoes on a freezing winter's day was never on Cyril Bainbridge's agenda growing up at East Farm in Cold Kirby, a couple of miles from the top of sutton bank where his parents Len and Alice had a mixed arable and livestock farm. " I thought there was a bit more to life than that" says Cyril whose Bainbridge Engineering buisness run with wife Wendy, has seen him become known in the agricultural machinary world as a manufacturer with buckets, brushes and muck forks being best-known lines. " When i left school one of the teachers told me i would amount to nothing. I think i've proved him wrong. My first job was working for Brian Otterburn's agricultural machinary buisness in Harome. I stayed for 6 years in what was a kind of apprenticeship and it was my move to work for Cliff Banks on his expanding dairy farm at Kilburn that paved the way for what we do today. Cliff said that so long as i gave his farm priority he was happy for me to build my buisness elsewhere. I thought it an ideal opportuntiy, an offer i couldnt refuse, so i gradually built up my buisness initally, as a man with a van going around the Sutton area maintaining and repairing tractors and all farm machinary"

The catalyst for Bainbridge Engineering to make its debut as when Cyril visited the Royal Smithfield Show in the late 1980s. " Cliff had a Keenan feeder but he couldn't get the parts for it when new ones were needed. I went on to their stand, had a word with Richard Keenan and an hour or so later he offered me the job of looking after all the machines he had sold in the UK from Lowestoft to the Scottish borders. I was all over the spot setting up new machines and servicing them. He had 450 machines in my area on his database at the time."

Foot and mouth disease restrictions brought Cyril's flourishing feeder buisness to a grinding halt, but it also forced him into the move that had defined his life and career. " Everything had been buzzing but then it was as though the tap had been turned off. Machines were being pulled off farms to work with them in lay-bys because of the movement restrictions and many herds had been culled. All the time we took whatever work we could as we had bills to pay, staff to pay and mortgages to meet. It was very concerning. When the restrictions were lifted the feeder side picked up again but this time we went independant and began mending any feeder whether Keenan or other makes. In the meantime we had started making lots of brackets for attachments and then we came up with making our own buckets on the basis that everybody who has a feeder needs a bucket to fill it. That was when we designed and built our first Bainbridge Engineering general purpose 7ft 6 bucket for telehandlers. I'd looked at several other companies' buckets and knowing how farmers work i knew they needed stuff that was strong. Some will make them out of lighter grade steel. We dont do a lightweight one, we do the right one. We use a thicker grade and add greater strength where others are weak. We started making brushes, important in this day and age for farmers who are looking at providing a clean farm for assurance schemes, especially tidying up around yards. Today buckets, brushes and muck forks make up around 70 per cent of our buisness. I still work for John and Sally Banks maintaining their machinary, but most of our work is conducted from home. Our work with feeders is now more involved with relining kits providing new belly plates"

New buisness in more recent times has come from another differnet source, looking after and designing equipment at horse racing stables including treadmills and maintaining horse walkers. Word of mouth is getting around and a new strand to Bainbridge Engineering has been added.

Next Wednesday Cyril, Wendy and the rest of the team including daughter in law Lauren, who works on the marketing side, will all be at YAMS, the "Yorkshire Agricultural Machinary Show. " We have stands at four shows each year including Ryedale, Great Yorkshire and Driffield. We've been at YAMS every year since it started and i'm a regular at the York Machinary Sales also at Murton. " All of the equipment we have on display at YAMS has already been sold so we will have the names of who it is sold to on each piece of kit. It's good advertising for them as it shows they are purchasing new kit as well as being good for us."

Cyril lived in Ampleforth for 3 years in his early 20s and for a long time lived at White Cross next door to the farmhouse before moving in to where his parents lived at East Farm when he purchased it 6 years ago.

BACK HOME- East Farm now runs to 25 acres and Cyril is still not tiddling potatoes. He rents the fields out to a local sheep man. " I never thought when the farm wad sold 10 years ago that i'd be back in the house where i grew up but it was repossessed by the bank. Wendy and I have spent our time doing it up" Cyril and Wendy have 2 sons, Liam, 30, married t o Lauren and they have a son Riley; and Jake 24, who is in the Army. 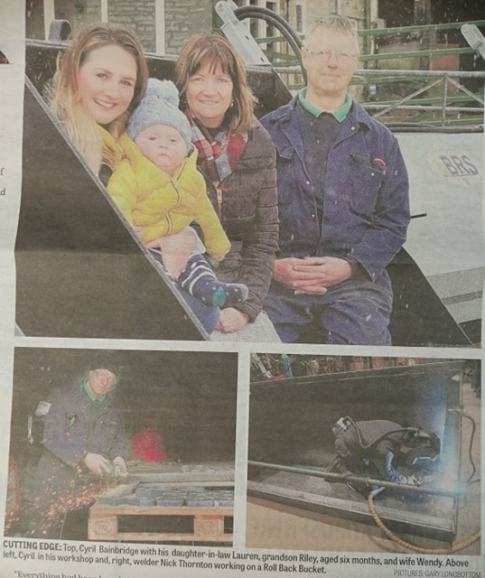 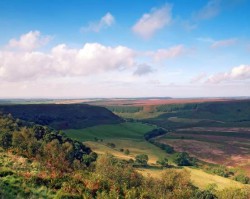